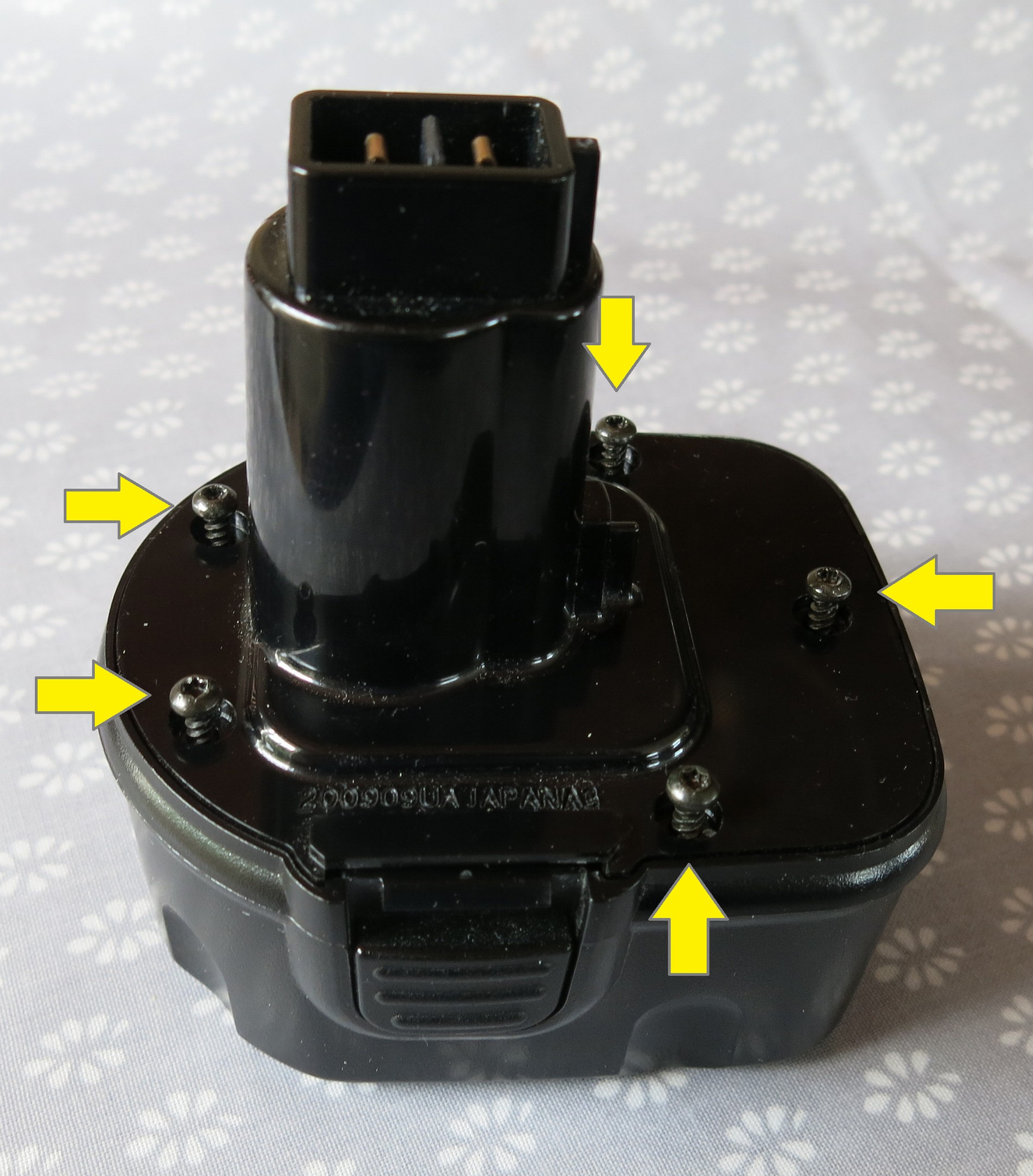 My DC740 drill came with two DE9074 batteries. Now one of the batteries will no longer charge. It only accumulate heat when seated in the DeWALT charger. The other one charge but don't deliver the juice as it used too, and it drains very fast. As two new batteries cost almost as much as a new complete drill system this page investigate the possibility to replace defective parts.

DeWALT charger used here are the DE9116 with auto 7.2 to 18 voltage selector. I'm speculating if the charger have misread the battery pack voltage (cell count) and with me keep on charging it multiple times before I understood it was faulty the charger itself have shorted out the battery over night. 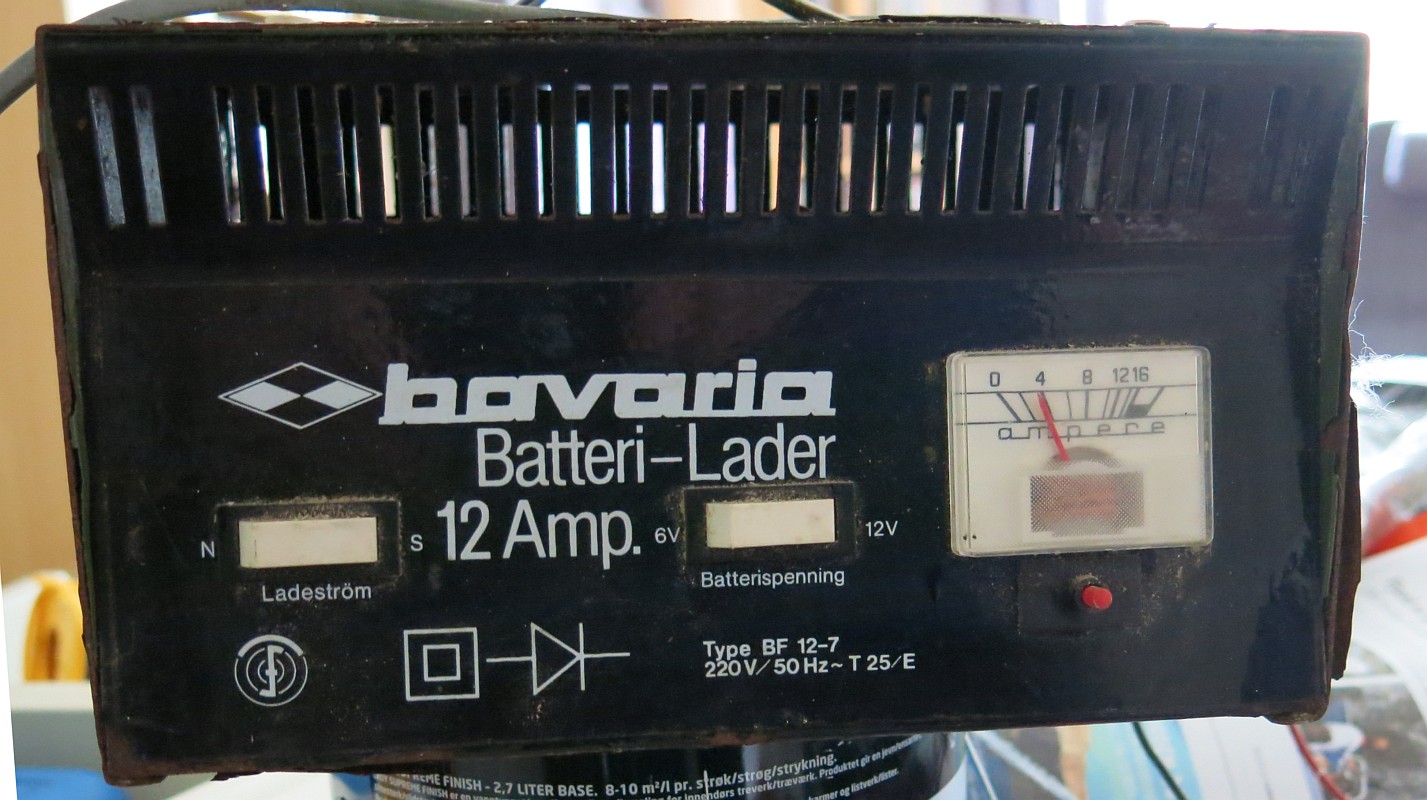 I wanted to test if it where possible to revoke the battery pack using a powerful and manually controlled car battery charger with no voltage or over current sensing systems.
Boosting the battery pack with nearly 4 Amp until the cells start to heat up less than 40 minutes later I learn that all cells exept the one on the top charge and heat up. The cell on the top still messure 0 Volt but the total package now come in at around 11.7V, and drops similar to the other package. One hour later charged cells now measure 1.30 to 1.35 Volt. 24 hour later they all stabilized at 1.27 Volt. Very promising they have so even resting voltage. Although NiCd will keep dropping up to 10% a month.

Inspection of the second battery reveals it also have a dead cell, the one in center with the white lead soldered to it. Measuring this package it drops to 11.25 Volt an hour after a full charge which fits nicely with our findings.

Funny how wrong the brain can be when settling on a timeline. Too my mind I bought this drill 3-4 years back. But the numbers stamped on the bottom of the paper isolation set production date to 2009. That's 8 years back so I've probably had it closer to 5-6 years. 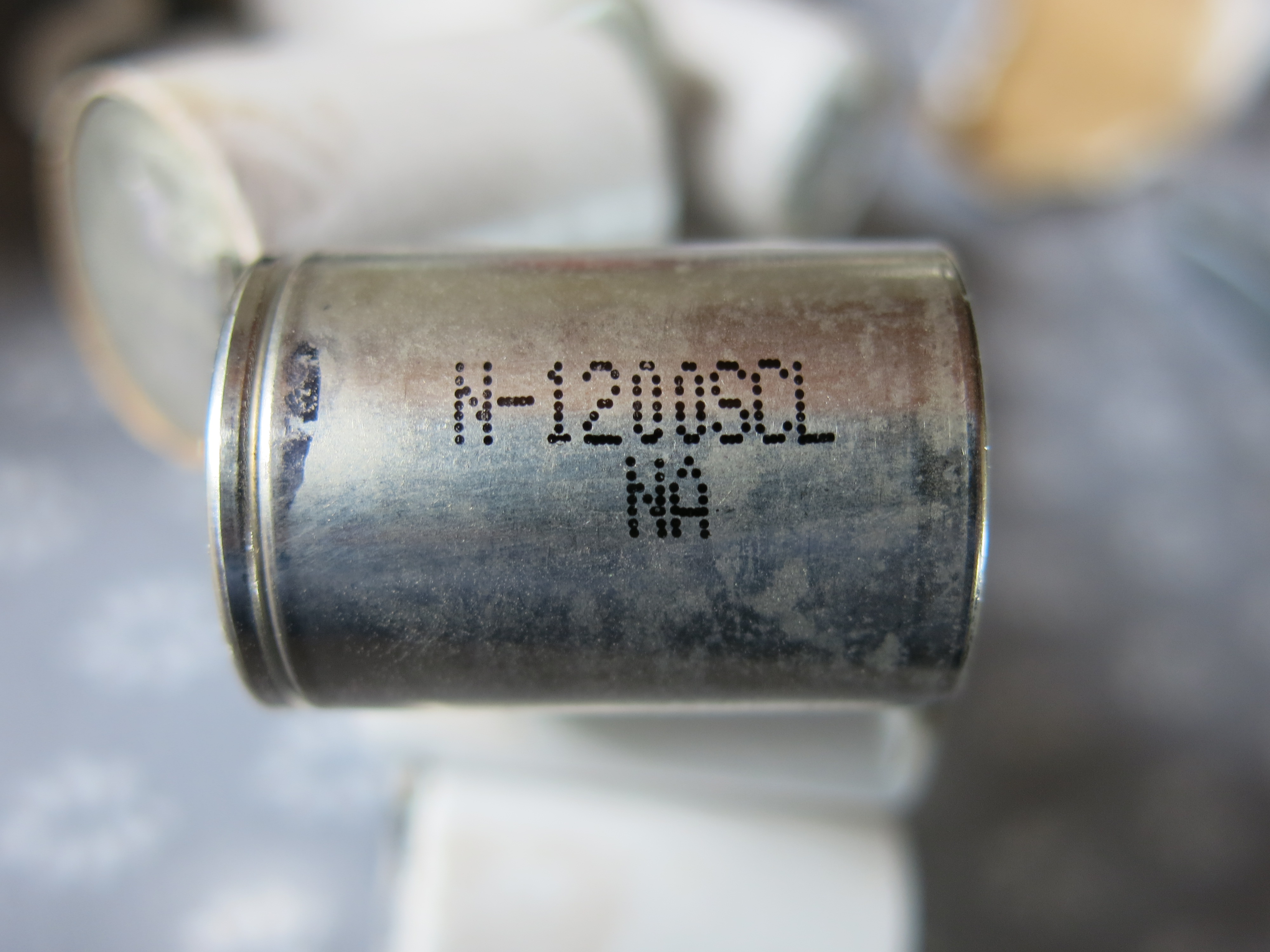 In the DE9074 battery pack we find 10 paper wrapped nickel cadmium 1.2 Volt 4/5 Sub-C (SC 22x33mm) sized cells with 1200mAh capacity. Note standard Sub-C cells are approx 10mm taller. DeWALT's rating at 1.3Ah are rather optimistic when utilizing 1.2Ah cells. Larger capacity cells are available if we where to replace them all. My attempt here are only to replace the defect cells. 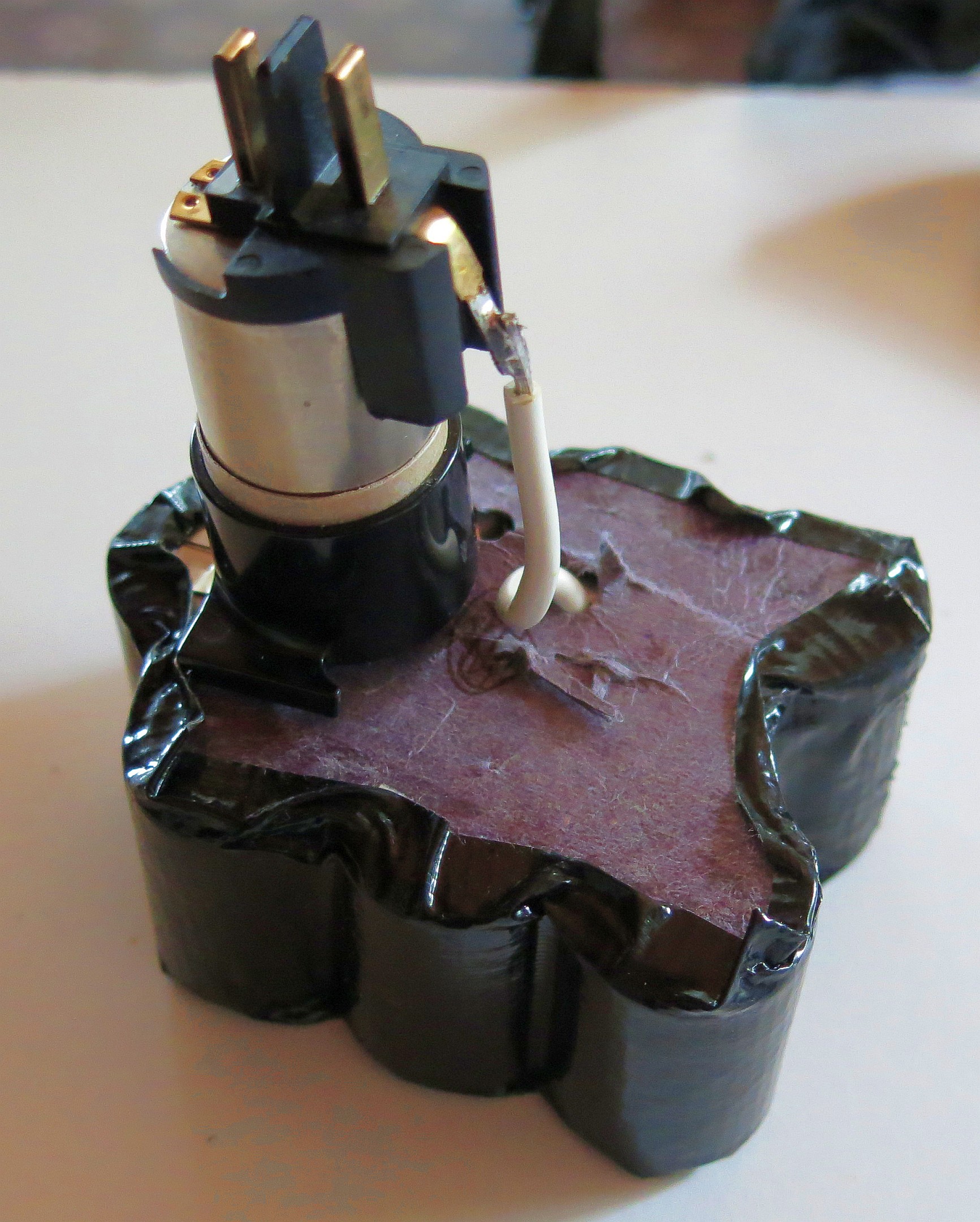 One possibility is to assemble a single working battery pack with good cells from both units. Two new cells can be had from China for less than 3 USD shipped. Not expecting the best quality for cheap I still hope they somehow match my already worn cells. Probebly the best solution is the first option, and then build a higher capacity pack with all new cells for less than 15USD shipped.

A popular modification these days are to replace NiCd with much more powerful LiPo or LiIon packs. But then we need a new charger and electronic circuit to protect the LiPo pack from being destroyed from over/under voltage, and fire hazard that comes with this implemented wrongly.
I prefer the convenience of the original charger which mean I'm restricted to what power NiMH cells has to offer. Quite frankly, with two working 1.3Ah packs I can't say I've run into problem other than when I forgot to charge the free battery pack. I also suspect its long livety are due to the fact they are cycled more optimal than two 4Ah packs would been for my hobby projects. 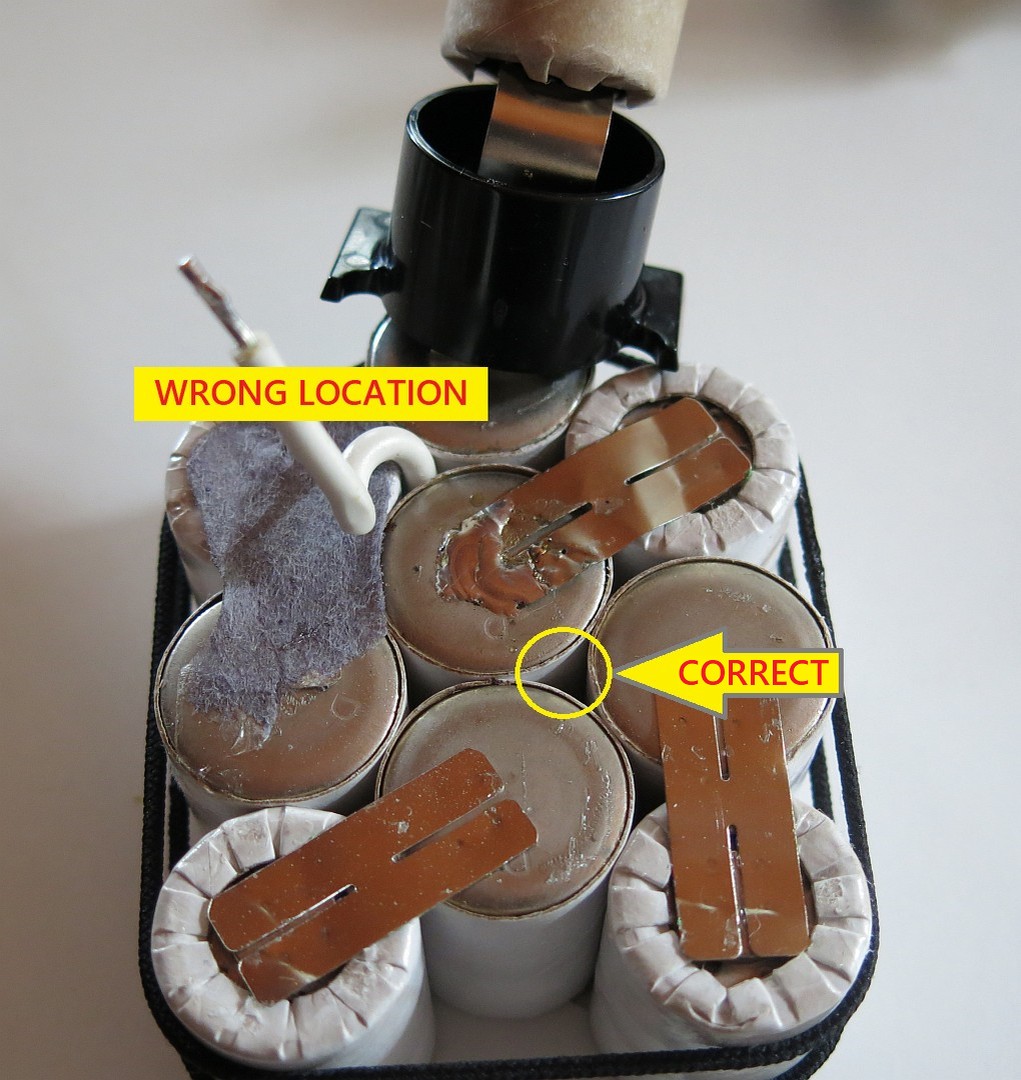 I ended up assembling a working battery pack moving one healthy cell from the "dead" battery pack. It was much easier to pray off the welding spots on the interconnection tabs than I had imagined using a small screwdriver. Using lots of soldering paste and thorough cleaning the soldering wasn't an obstacle either.

Just make sure you don't tear up all of the paper isolation. You will need it to isolate the top cell from the rest of the pack when assembling. I used a couple of hair bands to hold the cells together when soldering. And finished off the package using the ever so useful duct tape. The tape need to follow the contour of the battery cells so the screw will fit when assembling the battery housing. 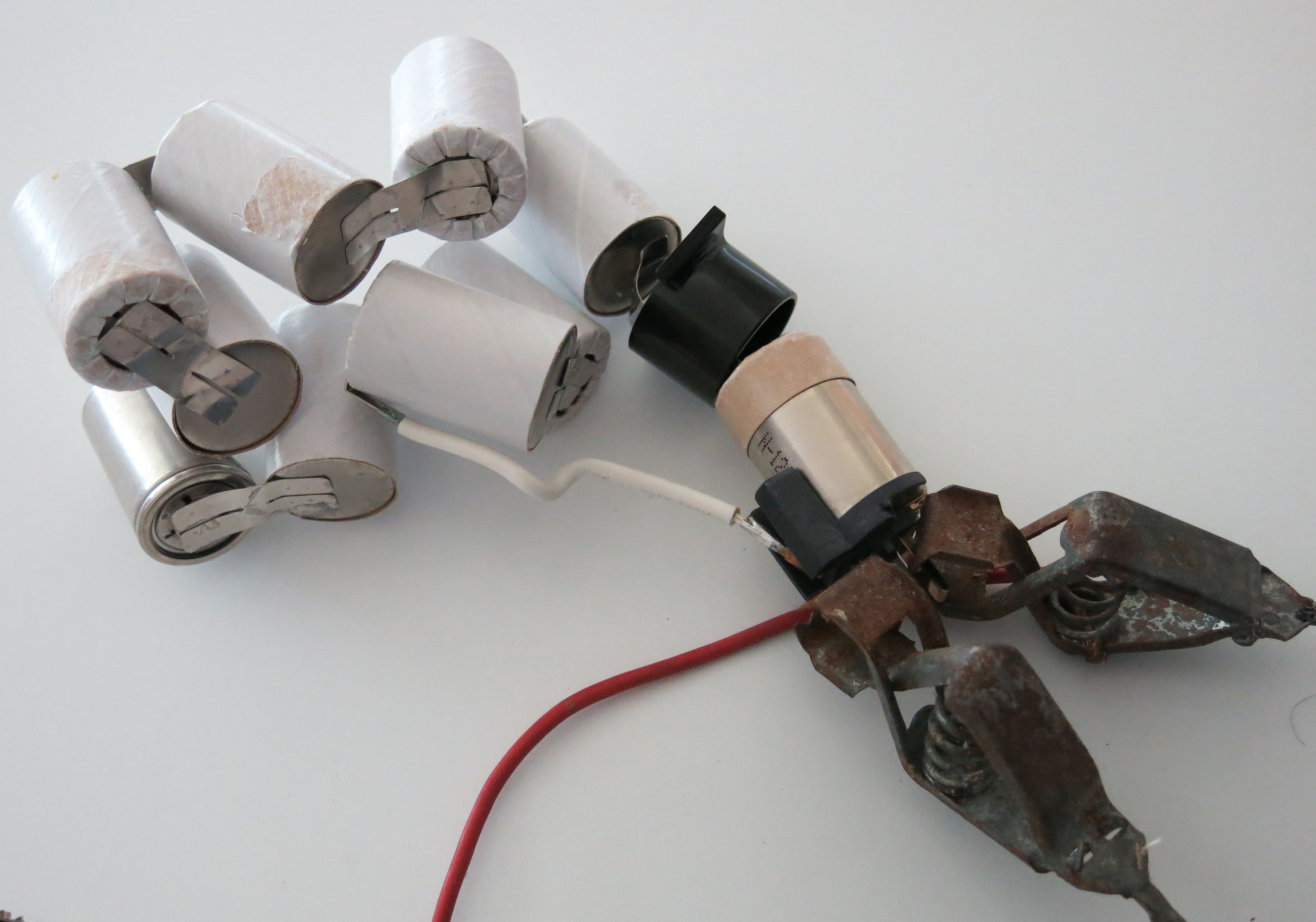 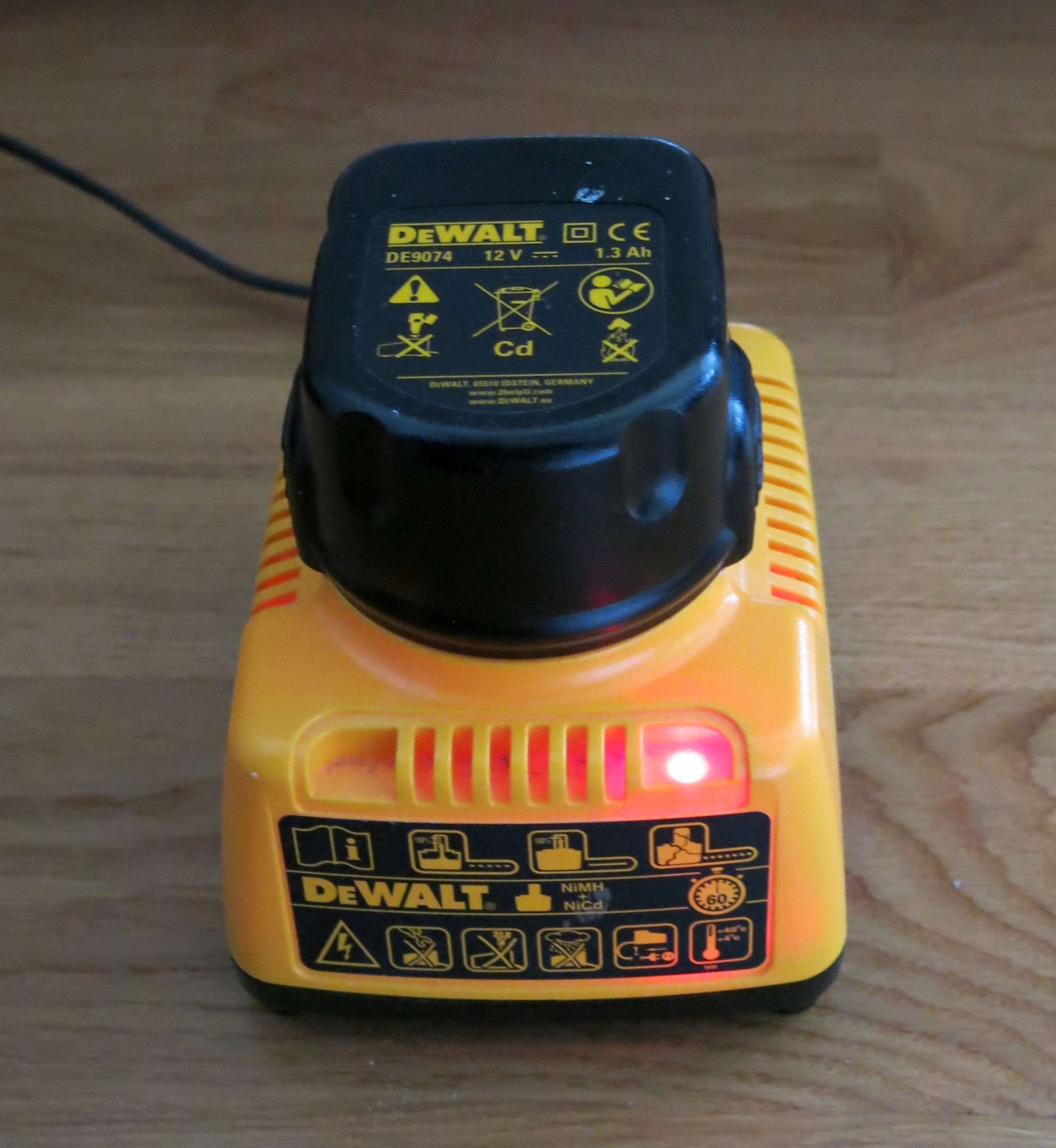 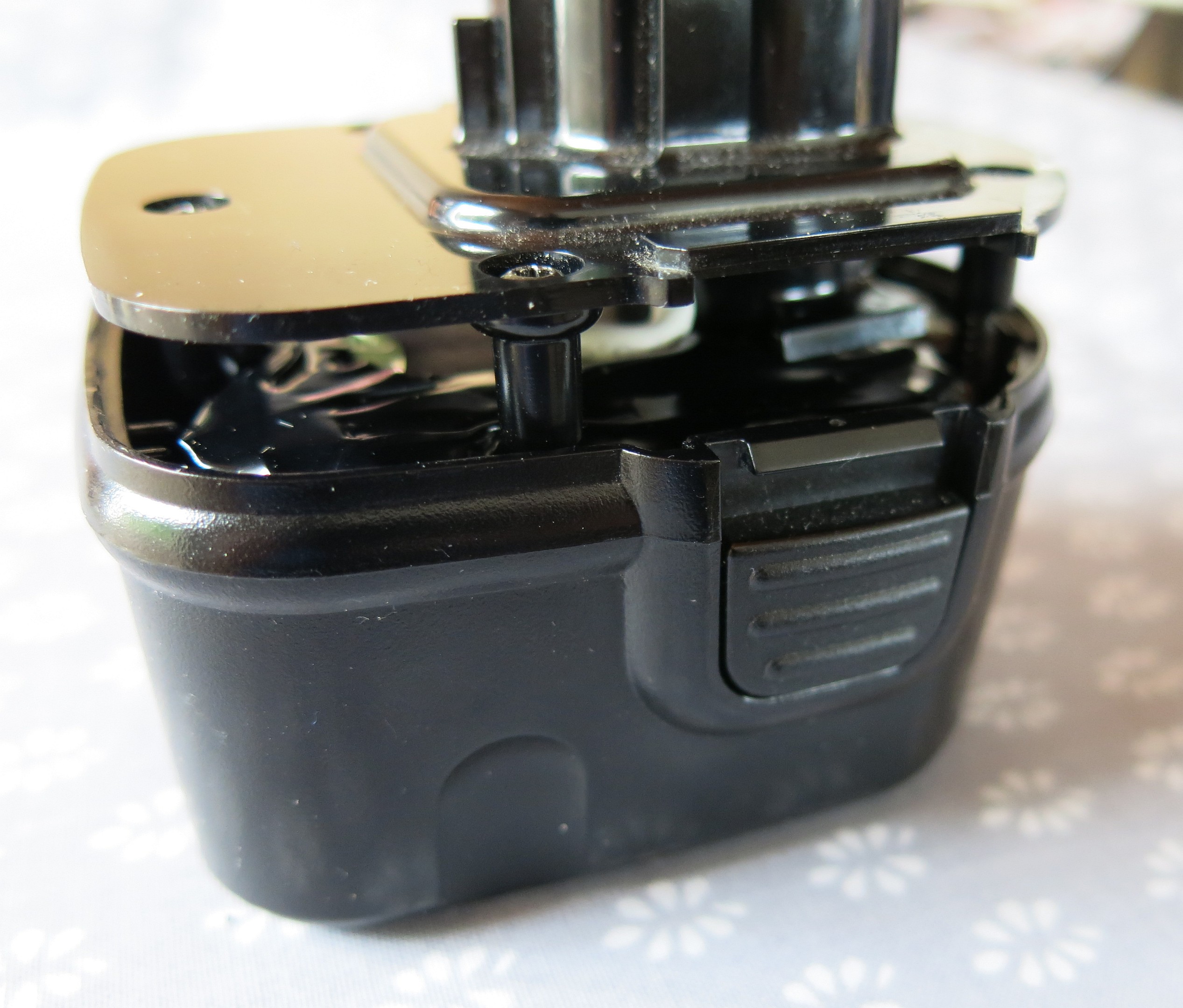 Quite impressed with DeWALT assembling this battery pack with screws. I hope the new EU directive will make this the standard. 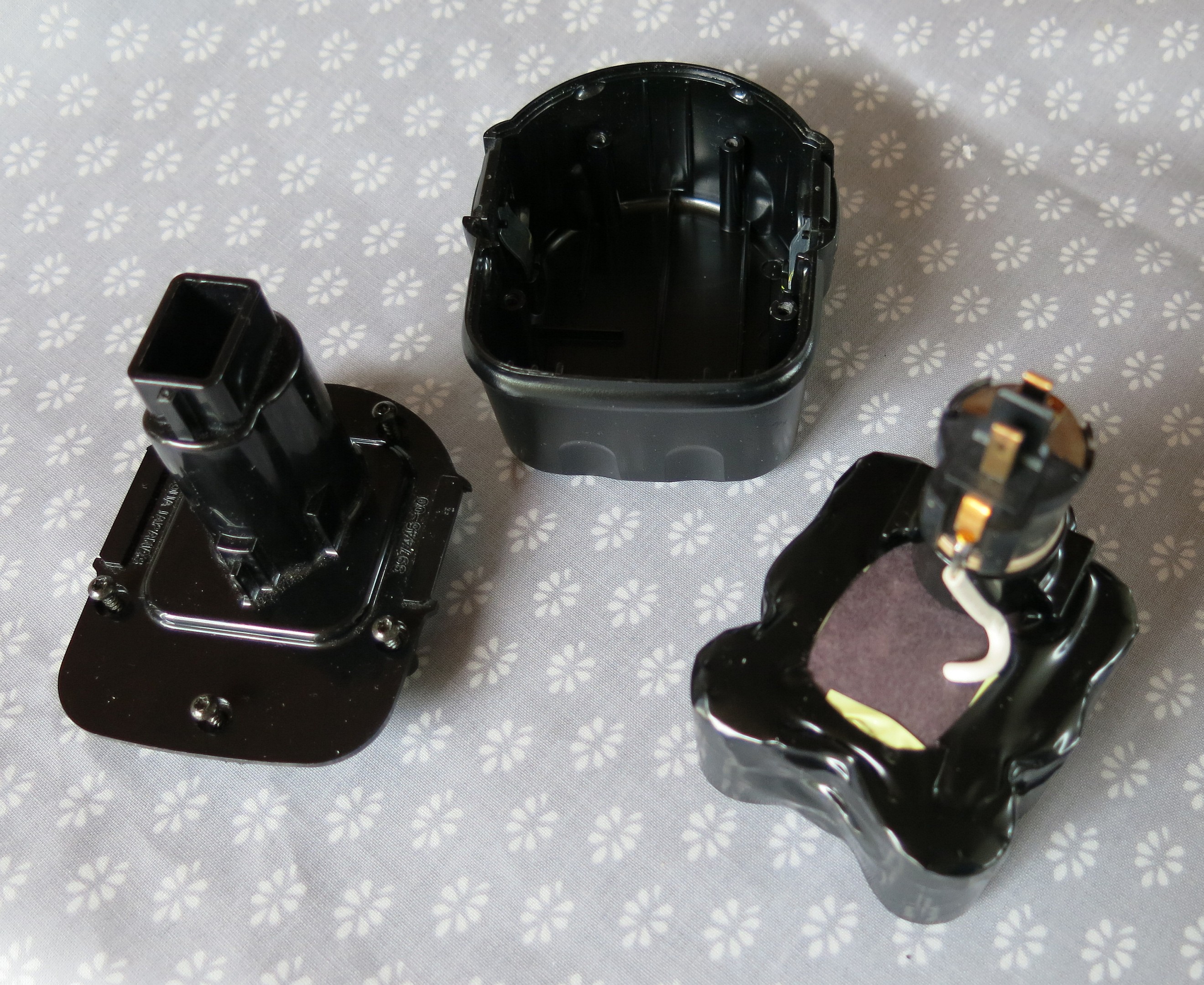 Quality NiCd cells are known to perform to full specifications after only 5–7 cycles; others may take 50–100 cycles. Peak capacity occurs between 100–300 cycles, after which the performance starts to drop gradually. www.batteryuniversity.com

An idea would be to modify the battery box to fit 10 AA size NiMh battery cells. Then we have the option to fit some expensive but very durable 2000mAh Panasonic Eneloops which doesn't self-discharge like normal NiCd / NiMh. And still be able to use the original DeWALT charger.

When batteries are used at high temperatures, their charge efficiency decreases and degradation of their performance and material properties is accelerated. SANYO Cadnica brochure 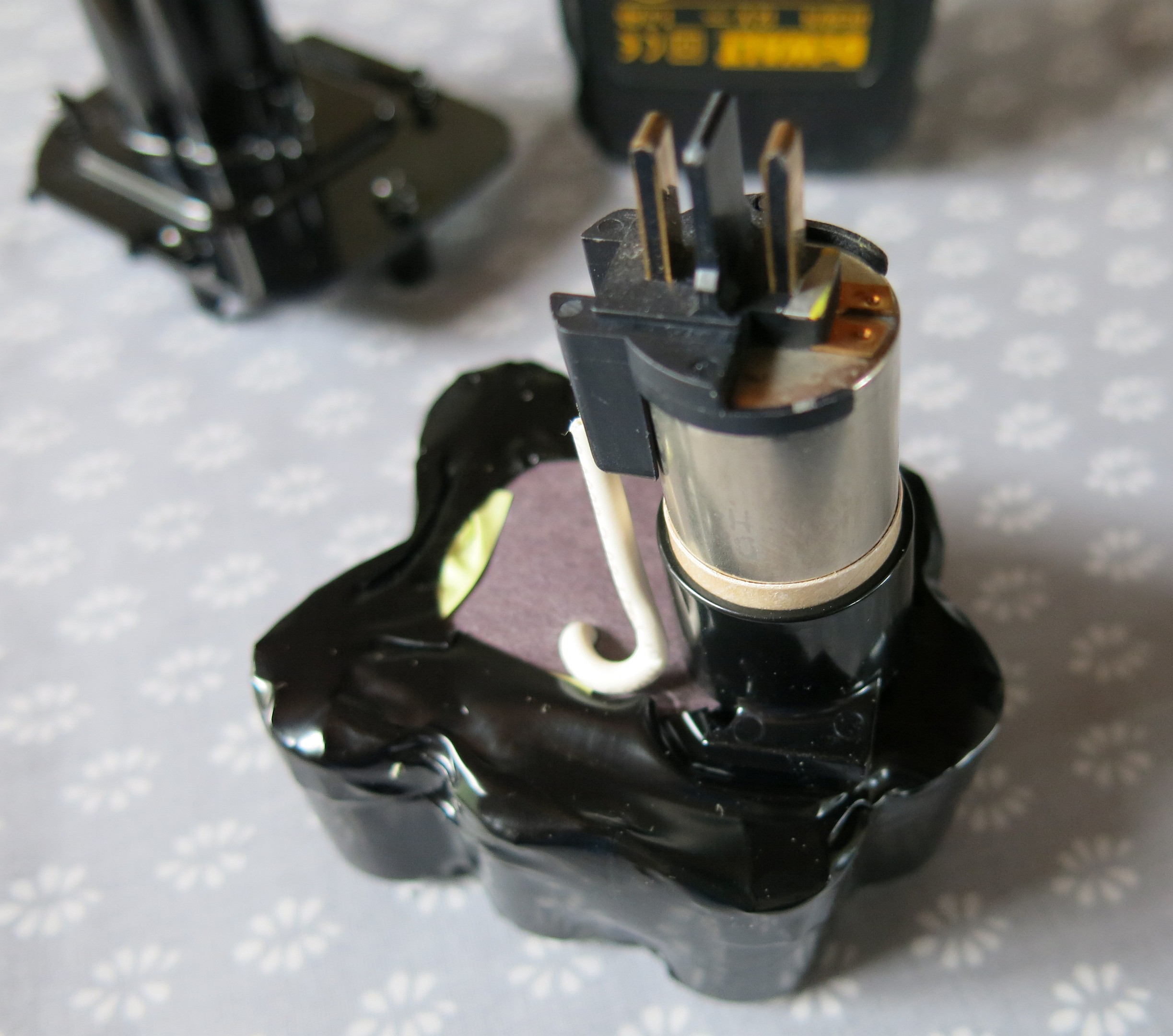